Guest Post at Rational Faiths: Putting Down Our Stones

While I hope that my brain and intellect would always be clear and active, it is my heart that tells me what's most important. My heart tells me this is one of the most important messages: Putting Down Our Stones

Putting Down Our Stones

"Mother Teresa, a Catholic nun who worked among the poor in India most of her life, spoke this profound truth: ‘If you judge people, you have no time to love them.’ The Savior has admonished, ‘This is my commandment, that ye love one another, as I have loved you.’ I ask: can we love one another, as the Savior has commanded, if we judge each other? And I answer—with Mother Teresa: no, we cannot." Putting Down Our Stones
—Thomas Spencer Monson, “Charity Never Faileth”, General Relief Society Meeting, October 2010 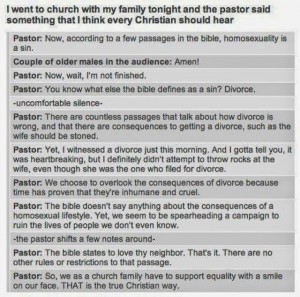 I've been contemplating several Christian messages lately, looking especially for how Jesus treated the various individuals he encountered during his life. I've been moved by the treatment of a particular woman in John 8 who had been unfaithful—and everyone knew it. The religious leaders wanted to focus on the punishment for sin, but Jesus shifts the focus to the judgement being heaped upon her. Jesus lives the higher law here, choosing to love the woman instead of berating her for being an adulteress.

I think we can make an important connection between this vignette and the current treatment of our gay brothers and sisters, friends and family. In doing this, however, I do not want to be misunderstood. I want to be clear that I’m not comparing adultery and homosexuality; I am comparing two narratives of judgement. Jesus's point was that judgement of others (or in this instance—condemning sin in others) was a sin in and of itself.  The only time we should openly condemn sin is when we find it within ourselves.

While it's true this vignette portrays someone who actually was committing a sin, only he who was without sin could be the rightful judge. Most importantly, in preface to the connection I'm trying to make, just being gay is not a sin. We would do well to retire “love the sinner, hate the sin” in reference to homosexuals because, again, there is no sin in being gay. Traditional religious teachings that made this assumption have evolved, and current traditional assumptions are being challenged quite articulately here, I might add. I personally don’t think Jesus is overly concerned with our sexual orientation, but I’m convinced he definitely cares about us as individuals.

The impressive takeaway from this is Jesus's treatment of an individual to whom harsh judgement was being shown—particularly by the religious leaders. It was the religious leaders, after all, who brought the woman caught in adultery before him. Their treatment of her was most callous and demeaning, and they judged her behavior harshly. Regardless of how often the punishment was actually carried out, the Mosaic Law requires stoning for those who commit adultery (vs 5) and I almost get the sense that these men were enjoying the idea. Undoubtedly she would have been filled with fear and, because of such public shaming, humiliation. I imagine this to have been quite an intense moment…so how did Jesus respond?

His response was profound. He called for one without sin to cast the first stone (vs 7). Who would take responsibility for the judgement now? No doubt this caused them to reflect on their own sinfulness before God. The fact that the entire crowd ends up dispersing is an implicit confession of their own sins. By condemning another they would be condemning themselves.

In the end others opinions, accusations, shaming, and judgment will not matter anyway. Ultimately it's between Jesus and the individual. And in this case Jesus and the woman were left alone (vs 9). She, who is so vulnerable, comes face to face with the Vulnerable God himself. In this vulnerability there is love, and he alleviates her vulnerability and the shame she might feel by pointing out that her accusers had withdrawn—they too were not sinless (vs 10). He doesn’t even ask about the charges. Then he tells her: "Neither do I condemn thee: go, and sin no more" (8:11). Misery...meet mercy.

While Jesus may not have condoned her behavior, he most certainly did not condemn her. He showed compassion and love. That is what matters here—and that’s what matters today. It’s clear that when all of Jesus's life experiences and teachings are taken as a whole, he focused much of his time and energy on those in society who felt the most marginalized. The Parable of the Good Samaritan teaches that in order to be a good neighbor we must show mercy to even the most despised. I’ve felt for quite some time that we must model the Samaritan’s compassionate courage to our gay neighbors. Regardless of our personal comfort, he explicitly expects us to go and do likewise (Luke 10:37).

The experience with the woman taken in adultery captures as well as anything the essence of Christ's new covenant: we are supposed to be in the love business rather than the condemnation business. We can show love and compassion by being considerate of those who are hurting, mourning with those who mourn, rejoicing with those who rejoice, loving without conditions of worthiness, and being respectful of each individual—because above all they too are a child of God. We show compassion by communicating in a warm way, showing empathy, being kind, having genuine concern for the one, accepting people for who they are at their core, and doing no harm.

What does it matter to us if the woman had been unfaithful? That's her burden to bear, her path to walk. No one is advocating for a life of sin followed by a get-out-of-jail-free card, but Jesus seems to be placing the emphasis on the importance of striving to be our best selves and extending mercy to everyone else. We each, in our own ways, are at times unfaithful to Christ and yet he loves us; he doesn't condemn us. "For God did not send his Son into the world to condemn the world, but in order that the world might be saved through him" (John 3:17 ESV). It is not our place to say what is or isn’t sin for someone else. Jesus is mighty to save, but ultimately that’s his job.

If Jesus himself declined to condemn an actual sinner caught “in the very act” (vs 4), then we certainly have no business making a point to express disapproval of anyone else’s life, homosexual or not. I’m pretty sure the only sin for which I will be held accountable is mine personally—whatever prevents me from being “at one” with God and my neighbor. He was pretty adamant that our greatest responsibility is just to love—love God and “love thy neighbor as thyself’ (Matthew 22: 35-40; Mark 12: 28-34). 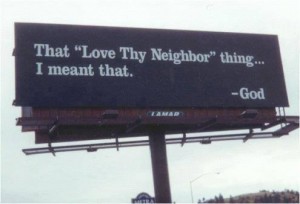 Does Jesus ever even mention to the woman what he personally thought about what she had done? He doesn’t have to—most likely she already knew what he believed. What’s most impressive is that he was more concerned with showing compassion to her, doing so both publicly and privately. Jesus then went on to teach that if we follow his example, we will not walk in darkness but have the light of life (John 8:12). Whatever that light-filled life means, it sounds like a much better way to live—for everyone involved.

It turns out that being about Jesus's and his Father's love business (and staying out of others business) is a really beautiful business to be in. Condemnation and judgement, on the other hand, are ugly—and a sin. Now, go and sin no more.
Posted by Clean Cut at Tuesday, May 27, 2014

how well put we are not here to judge but to love....