Bound to the Lord

Spotlighting an excellent post: I the Lord Am Bound, by Sam MB at By Common Consent.

Some of my favorite lines:

“When I think about binding God, this is the image that fills my soul with light. That God has adopted me, that he will claim me–bedraggled, bemused, bedeviled me–as his son, that he will allow our relationship to be the tender and overwhelming and often ineffable relation of parent to child. This to me is the great promise and reassurance of the possibility that God is willing to be bound to us.”

“God is not a vending machine”

“In my times of yearning and struggle, when I most hunger for God’s presence, it is the promise of a 'bond and covenant that cannot be broken' that buoys me up.”
Posted by Clean Cut at Wednesday, October 28, 2009 4 comments:

Accounting For The Book of Mormon

Jeffrey R. Holland's recent sermon and testimony has put a spotlight back on the Book of Mormon. It was a powerful and moving address. Three great commentaries on the talk can be found here at Mormanity, Dave's Mormon Inquiry, and Life on Gold Plates.

While his primary audience obviously consisted of believers in the truthfulness of Book of Mormon, it once again piqued my curiosity about how non-believers account for the Book of Mormon. I've been curious enough to try and step into others' shoes to see how they account for it. And while I often find myself being able to empathize with their position, I also repeatedly find their explanations frustratingly insufficient. Perhaps that sentiment goes both ways.

Nevertheless, for those who do not believe the Book of Mormon to be the word of God, explaining it away presents a serious and difficult challenge. Most do not step up to the challenge at all, and dismiss it far too easily. Those who so quickly dismiss it never seem to convincingly articulate why, or at least how they do account for it. It's one thing to question various pieces of a puzzle, but to dismiss this puzzle without examining so many significant and important pieces seems reckless and irresponsible.

After examining any and all of these alternative explanations, it's still more improbable for me to believe that Joseph Smith, and those witnesses who saw and felt the plates, were lying the whole time. Not that people don't lie; people lie all the time. But in this case, look at what was at stake! And what would have been the motive for even attempting to pass off a "19th century hoax" as a sacred record and ancient witness of Jesus Christ? These are not unreasonable questions. And I think they demand good and reasonable answers, especially if I were to be persuaded to change my mind regarding the Book of Mormon--that it truly is what it purports to be.

I most certainly would need someone to do much better in making a case than regurgitating the same explanations that have already been brought forward. That Joseph thought it would be fun to get involved with magic, produce a hoax, and then live the unrelenting and persecuted life he lived in defending that lie--even eventually giving his life for it--just doesn't work for me.

As Elder Holland recently pointed out, why would Joseph and Hyrum turn to a fabricated hoax for spiritual strength and comfort right before they were killed? Meanwhile, there still cannot be found a reasonable and good explanation for how it was fabricated in the first place. Either Joseph was a genius who wrote it himself or he improbably got help from some other ghostwriter(s). And if the best someone can do is connect a few verses of Alma 40 with similarities from the 32nd chapter of the Westminster Confession of Faith, or say that Joseph just copied from some other manuscript, then an explanation has been attempted for only a small portion of the book. But how was the rest of it written? What of the rest of Alma, or Mosiah, or the vast majority of the rest of the Book of Mormon? Certainly there are many other complicated books which have single authors (J. R. R. Tolkien comes to mind), but what of the Book of Mormon's powerful, moving, and convincing witness of the divinity of Christ, our Redeemer? After all, Christ is the central character and focus in the Book of Mormon from beginning to end. Was Joseph Smith really capable of that?

So far the "best" explanation I've been given by a thoughtful critic of the Book of Mormon is that it's simply a "hodge podge of various common 18th century themes, sources, and religious controversies combined into an imaginative and compelling story." But even this explanation doesn't give the entirety of the Book of Mormon and all it represents the amount of thought that it demands. And besides, didn't Alexander Campbell already say essentially the same thing while calling Joseph an impostor back in 1831? Such a flippant explanation does indeed seem a little pathetic for someone familiar with the totality of the Book of Mormon, let alone the abilities of Joseph Smith or the unbelievable help (aka: vast conspiracy) Joseph would have needed to pull off such an amazing scam.

It's actually harder for me to believe these alternative explanations than to simply believe that God and angels were involved. And as crazy as that can sound to a non-believer, it shouldn't be that crazy for any believer in the Bible, which also describes angelic visitations. Knowing what I know, it would require a greater "jump of reason" for me to conclude that the Book of Mormon wasn't brought forth by the "gift and power of God".

The Book of Mormon continues to be a marvel to me. I continue to be amazed at its relevance in my life today, as well as the great wisdom and power I find in its pages. And while I'm open minded about the actual translation process and even the presence of seeming anachronisms, those points all seem to miss the point. The Book is of God. I feel similar to Blake Ostler, who recently wrote on another blog: "The Book of Mormon is like breath to me. I love its teachings and passages so much that they are like a part of my soul."

And even I fail at fully accounting for all that it has meant for me.
Posted by Clean Cut at Tuesday, October 13, 2009 141 comments: 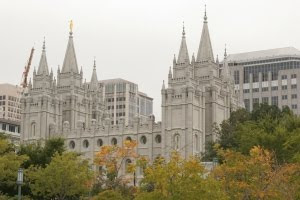 Conference was wonderful. There were many highlights, but Elder Holland blew me away. It reminded me of his testimony of the Book of Mormon in "Christ and the New Covenant", only delivered orally and aimed at preventing Latter-day "hearts" from failing. I'm looking forward for the printed texts to become available. In the meantime, I've downloaded the audio of Elder Holland's address.

Something else new and exciting is that the music from each conference session is now available for individual download. Looks like you can download the individual songs back to October of last year. I've currently got "O Divine Redeemer" in my iTunes on repeat. Moving, powerful, and right to the heart of the gospel. Capture your favorite Conference highlights for yourself!
Posted by Clean Cut at Tuesday, October 06, 2009 No comments:

April 1999
Singing in the Priesthood Session inside the Tabernacle my freshman year in college. It was Mac Wilberg's last year at BYU. We sang his arrangement of "The Spirit of God like a fire is burning", with all the key changes. I felt like angels were going to lift me through the roof and take me straight to heaven.

April 2001
Sitting in a chapel in Duran, Ecuador with my missionary companion, Elder De Leon, from Guatemala. President Hinckley announced The Perpetual Education Fund and I was overcome with joy at the realization that this blessing would directly impact Elder De Leon when he returned home.

October 2002
I was in Las Vegas as one of the "best men" at the wedding of a friend of mine (not LDS). My flight back to Salt Lake took place during the Sunday morning session of General Conference. I was hoping we'd land in time to at least hear President Hinckley's concluding remarks. After grabbing my luggage, I ran to my car and turned on the radio. Elder Eyring was just finishing his talk. President Hinckley was next.

I drove downtown and circled around and around Temple Square with the radio on, listening to a prophets voice speak about The Marvelous Foundation of Our Faith: "We declare without equivocation that God the Father and His Son, the Lord Jesus Christ, appeared in person to the boy Joseph Smith. When I was interviewed by Mike Wallace on the 60 Minutes program, he asked me if I actually believed that. I replied, "Yes, sir. That's the miracle of it." That is the way I feel about it. Our whole strength rests on the validity of that vision. It either occurred or it did not occur. If it did not, then this work is a fraud. If it did, then it is the most important and wonderful work under the heavens."

October 2003
I accompanied my wonderful grandmother to every single general session inside the Conference Center. She had flown in from Oregon and was determined to be at each session in person. She's now 94.

April 2003
Singing in a combined BYU Choir in the Conference Center. We'd been practicing a well known version of "If You Could Hie To Kolob". Right before Conference the First Presidency requested we sing an older version with an entirely different tune. It grew on me. That session Elder Eyring gave a talk entitled "A Child and a Disciple". He ended with a witness that will always be special to me: "I testify that Jesus is the Christ, that He is my Savior and yours and the Savior of all the people you will ever meet."

April 2004
Sitting in the Conference Center with my dad, brothers, and future brothers-in-law; hearing Elder Maxwell testify: "God has known you individually, brethren, for a long, long time (see D&C 93:23). He has loved you for a long, long time. He not only knows the names of all the stars (see Ps. 147:4; Isa. 40:26); He knows your names and all your heartaches and your joys! By the way, you have never seen an immortal star; they finally expire. But seated by you tonight are immortal individuals—imperfect but who are, nevertheless, 'trying to be like Jesus'!"

The next morning I sat inside the Conference Center with my future wife--having just been engaged the night before. The Mormon Tabernacle Choir sang "For The Beauty of The Earth", and when they sang the line "For the joy of human love" I wondered if that line was meant for that very moment. I was sitting next to the woman I was going to spend eternity with, and I couldn't have been filled with more light, joy, and love.

That session Julie Beck gave a talk entitled "A 'Mother Heart'". My wife truly has a mother heart. Liriel Domiciano had been invited to sing a rare solo with the Tabernacle Choir and it was truly magnificent--"I Know That My Redeemer Lives". That's my testimony too, and it goes right to the bone.
Posted by Clean Cut at Friday, October 02, 2009 2 comments: