To be or not to be? Public/Private Priesthood Session

So I know I'm not the first to ask this question, but desiring further knowledge, I'm asking anyway:
Why isn't the Priesthood session of General Conference broadcast over television (e.g. BYUTV) similar to the Relief Society general meeting and the other general sessions?
(Especially since they're all later published together publicly anyway....)
Posted by Clean Cut at Wednesday, September 29, 2010 8 comments:

Spotlighting Papa D's post: "Charity Seeketh Not [Only] Her Own [People]: Those Who Hate You"

While the phrase "Be in the world but not of the world" is sometimes used as justification to avoid interacting with others who are different, Papa D reminds us that applying the Sermon on the Mount means we "must interact with others to do good to them."
Simply put, the "do good" clause knows no boundaries, even among those we might prefer to avoid:
"We can't become truly charitable in isolation, and we can't become truly charitable through only an intellectual understanding of it. At some point, we simply must LIVE it."


Also, an insight on "abstain from all appearance of evil":

"Perhaps one of the most misunderstood scriptures in the entire Bible. In its original usage, it does not mean to avoid anything that even looks like evil - that appears to be evil. Rather, it means something like the following: "Abstain from evil no matter its appearance - no matter how it looks."
"...The focus is not on avoiding anything that someone else might perceive to be bad, but rather to avoid that which truly is evil."
Posted by Clean Cut at Tuesday, September 28, 2010 No comments:

A conversion story that inspires the soul:  Gospel Principles, by Tracy M.
Posted by Clean Cut at Thursday, September 23, 2010 3 comments:

In Honor of Constitution Day 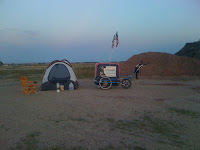 For many weeks now I've been following (with great fascination) the journey of Ray Brown, a much beloved but recently retired U.S. history teacher. He's literally walking across the United States of America--in part to fulfill a personal dream, but also to raise public awareness of the U.S. Constitution, the Bill of Rights, and support for American history. So today, America's second "birthday" (September 17th, 1787), please allow me to introduce you to his blog--A Son of Liberty's Walk Across Ameria.

He updates the blog everytime he gets to a town and stays in a hotel. In between towns he camps in the tent he carries in his custom made "handcart" trailer. He began in June 2010 on the Oregon Coast (Florence, Oregon) and this morning he left the town of Ogallala, Nebraska. He'll end up by walking through Philadelphia (birthplace of the Declaration of Independence as well as our Constitution) before reaching the Atlantic Ocean near Atlantic City. He's now walked over 1600 miles, crossing the continental divide in Yellowstone National Park, and has distributed countless copies of the Bill of Rights along the way. I'm completely enthralled. I'm just surprised some major news network hasn't already picked up on his story.

My thoughts for now

I've had an extremely busy and wonderful summer. Before you know it, over a month goes by before a new blog post goes up. I have some thoughts on the back-burner. But I have much less time to write out those thoughts. I've also had much less time to read other peoples' thoughts. But I keep a Google Reader feature on my iGoogle homepage, and this post caught my eye today: Follow the Brethren and Never Fall.

For better or for worse, it sparked my first comment in weeks:

"Personally, I'm more comfortable with this scripture as a metaphor to follow Christ with exactness--'our prophet, priest and king'--marching onward as Christian soldiers.

"I'm generally less comfortable with an intense mantra of "follow the prophet" only because I don't believe that a fallible prophet is necessarily synonymous with following Christ. While there are obvious virtues for both, such a militant intensity of focus/zealousness to any mortal might actually lead to looking past the mark--or The Mark."

And those are my thoughts for now.
Posted by Clean Cut at Friday, September 10, 2010 22 comments: