Not So Clean Cut 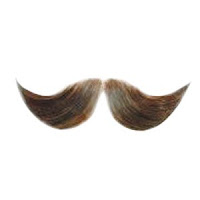 Something has been bothering me for a number of weeks now. A good friend of mine was recently called into a bishopric after a ward split. (No controversy there; I'd sustain him in a heartbeat. I'm just a little perturbed by what followed.) After successfully being interviewed and sustained in sacrament meeting, the stake president's counselor pulled him aside and said that the stake president had requested that he shave his mustache. And that's it. That's what bothers me. Now some might make this a matter of obedience to authority. To that I say "horsefeathers". Of course, feel free to agree or disagree.

Now for some background. My friend had only shaved his mustache once since he started growing it as a teenager--and that was on accident. He's now a [very youthful] grandfather. I sympathize with him; it meant a lot for him to keep his mustache. Adding to the irony was the fact that his well-trimmed mustache was never an issue when he’d previously served in a bishopric, and it was never an issue with his employer--the LDS Church. Yet somehow it's a big enough deal in the eyes of LDS ecclesiastical leaders who’ve now called him to serve in the bishopric.

Deep down he was actually afraid that somebody, someday would ask him to shave it off. Apparently when [then] Elder Uchtdorf came around a few years ago, a local ecclesiastical leader asked him what he could do to improve and was given counsel to shave and remain clean shaven--I guess you could even say "clean cut". I see no problem with giving such counsel to an individual who asked for it. The problem I see is when such "counsel" is then interpreted as a requirement or a commandment, and requested perpetually of others, rather than let each individual choose how (or if) this will personally be applied.

I realize that some familiar with my blog name might find a small irony in the fact that I'm the one who is bringing this up. But while I personally choose to keep a clean-shaven face and a clean-cut haircut, I’d be the last person to suggest this has anything to do with personal worthiness. Quite simply, my wife suggested “Clean Cut with a Coke” and I liked the play on words and the alliteration. For the sake of simplicity I shortened the name, while also enjoying the irony of my apparently "orthodox" appearance belying my sometimes less than orthodox views. In reality, I despise rigid rules and legalistic, dogmatic approaches to the gospel.

To come clean on this issue that is anything but clean cut, I confess that in a previous life I may have judged more by appearances. (And to my brother-in-law, when I gave him a hard time for growing a goatee immediately after his mission, I say sorry. I'm a changed man. And to complete my repentance, I admit now that I was wrong to even make it a big deal.) I've long since become more liberal--and charitable--in my religious views.

While I don’t fully know or understand the rationale behind this specific request, I’d still prefer personal application of gospel principles and free agency. “In essentials let there be unity, in non-essentials liberty, and in all things charity”. Suffice it to say I believe this is a “non-essential”, and probably leans more towards “keeping up appearances”.

I'm quite a fan of Hugh Nibley's position. Nibley, who was simultaneously loyal and critical, has been described as being “bothered by what he saw as the unthinking, sometimes almost dogmatic application of some portions of BYU's honor code. Nibley had no objection to requirements of chastity or obeying the Word of Wisdom, but he thought the often intense scrutiny directed at grooming (hairstyles and clothing) was misguided.” In 1973, he said:

"The worst sinners, according to Jesus, are not the harlots and publicans, but the religious leaders with their insistence on proper dress and grooming, their careful observance of all the rules, their precious concern for status symbols, their strict legality, their pious patriotism... the haircut becomes the test of virtue in a world where Satan deceives and rules by appearances."

Without reservation I add a “clean cut” amen to Brother Nibley. I'm not sure how ubiquitous these kinds of requests are in the Church, but the whole situation seems all too pharisaical for my liking. The gospel is not a gospel of guilt, or rigid obedience to authority for that matter. After all, Jesus himself was quite the iconoclast. But I'm curious how others' see this. What would you have done (or said) in both the “counselor” and “counseled” roles? What other thoughts or insight might you have?
Posted by Clean Cut at Sunday, June 27, 2010 29 comments: