We all get forwards--sometimes too many--and rarely are they even worth the time to read. For me, it's even less likely I'd pass them along. But here's one I actually liked:

Aliens are coming to Earth on Friday and their mission is to abduct all the good looking and sexy people.

You will be safe, but I'm just emailing you to say goodbye.


Feel free to share your favorite forwards (or jokes) below:
Posted by Clean Cut at Monday, January 31, 2011 2 comments: 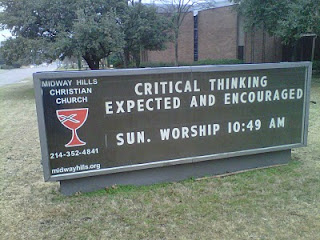 What Would Eugene England Do?

Last summer while visiting Washington D.C. I went to the Jefferson memorial for the first time. I was struck not only by its size, but by the words of Jefferson engraved upon the walls. Most prominent are the words inscribed around the dome:

"I have sworn upon the altar of God eternal hostility against every form of tyranny over the mind of man."

I loved the quote--another bold declaration of independence, if you will, from control over individual beliefs, thoughts, and freedom of speech/expression.

I thought about that quote while writing my last post, "Let them worship how, where, or what they may", and of times when Latter-day Saints haven't been quite as tolerant of divergent beliefs/thoughts among their own. I remembered a specific experience Eugene England had with Bruce R. McConkie in which Gene showed such grace (when hostility would have been so natural) after being confronted with authoritarianism. As for myself, I'm not sure how I would have responded if it had been me. Perhaps that's the reason I'd like to spotlight a post that raises some of those same introspective questions (and gives more of the backstory):

Spotlighting WWEED? What Would Eugene England Do? by the Narrator.
Posted by Clean Cut at Friday, January 14, 2011 7 comments:

"Let them worship how, where, or what they may"

"We claim the privilege of worshiping Almighty God according to the dictates of our own conscience, and allow all men the same privilege, let them worship how, where, or what they may"

According to the 11th Article of Faith, it seems to me that Latter-day Saints are typically quite generous (or at least ought to be) in our allowance (or tolerance) of the religious beliefs of those not of our faith. But must letting "them worship" differently only refer to people in other faiths? Or can "them" also refer to fellow Mormons in terms of how they worship? My question isn't original (see "Should we apply the 11th article of faith internally?"), but it's nonetheless a question I've had on my mind lately.

There may have been a time when I read this particular article of faith only in the direction of "us" and "them"--Mormon and non-Mormon. Now I read it and apply it in all directions, including within Mormonism. How tolerant are we with "allowing" variances within our own faith as opposed to simply being tolerant with "others"? How generous are we with each other in recognizing that we must each individually follow "the dictates of our own conscience"? What should be said (if at all) about the limits to divergence of our personal choices of worship (or lack thereof) inside the Church of Jesus Christ of Latter-day Saints?
Posted by Clean Cut at Tuesday, January 11, 2011 15 comments: