"A Vote for Romney Is a Vote for the LDS Church"

I'm really not a pugnacious person. So why bother even mentioning this? Because I can politely disagree. And every once in awhile I don't care to be polite. Just because an imperious author gets published doesn't mean he's not still full of it. Case in point:

"Certain qualifications make a candidate unfit to serve. I believe a candidate who either by intent or effect promotes a false and dangerous religion is unfit to serve. Mitt Romney has said it is not his intent to promote Mormonism. Yet there can be little doubt that the effect of his candidacy—whether or not this is his intent—will be to promote Mormonism. A Romney presidency would have the effect of actively promoting a false religion in the world. If you have any regard for the Gospel of Christ, you should care. A false religion should not prosper with the support of Christians. The salvation of souls is at stake.

For me, that alone disqualifies him from my vote. Because Mormons believe in continuing revelation, it is possible that in the future the LDS church will renounce its heretical beliefs and come fully into the fold of orthodox Christianity. Many theologians and church historians believe the church is on such a trajectory. But if that happens, it is an event still well in the future. The Mormon Church of today is, by the lights of biblical evangelical Christianity, a false religion. If Mitt Romney believes what the Mormon Church teaches about the world and how it operates, then he is unfit to serve. We make him our President at great peril to the intellectual and spiritual health of our nation."


Whether one thinks that believing in some or all aspects of Mormonism (or any other religious preference) is dangerous or silly is one thing, but disqualifying an American from service because your perception of their religion is warped is just stupid. It's also unconstitutional--"no religious test"--and ironically un-American.

Romney is not the first Mormon to seek or hold public office. The world still spins and people still believe what they want to believe. A president's religion doesn't change any of that.

The whole argument is ridiculous--especially the implication that it's his Christian duty to oppose Mitt Romney. If you don't like Romney, fine. If you don't like Mormonism, fine. But opposing someone just because of their religion (and saying his/her election determines the salvation of souls) is not only bigoted--it's stupid. Someone ought to kindly inform the author that he's being obtuse.
Posted by Clean Cut at Wednesday, May 25, 2011 12 comments:

It's hard enough planning for my wife's birthday (May 21st) on normal years, but this is really going to crimp my plans.
Posted by Clean Cut at Wednesday, May 18, 2011 2 comments: 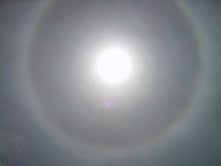 Now that I've finished my masters degree (commencement is this Saturday), I feel like I can finally breath (this semester's "exit paper" has been grueling) and take notice of the world around me. Today at lunch I happened to look up. I was surprised to see this dark ring around the sun--I've never seen anything like it before.

I'm sure it's not the first of many things I've failed to notice in life by failing to look outside of myself--whether looking around me or up. And maybe its the primary chorister calling I have, but reflecting on this picture of the sun (I snapped it on my phone) made me think of the little song, "Shine On":

1. My light is but a little one,
My light of faith and prayer;
But lo! it glows like God’s great sun,
For it was lighted there.

2. I may not hide my little light;
The Lord has told me so.
’Tis given me to keep in sight,
That all may see it glow.

Truth is, I haven't particularly felt much like shining lately. My "light of faith and prayer" has diminished somewhat in recent months. There hasn't been any sudden crisis of faith, just an ongoing transition in matters of faith in which things no longer shine as bright and clear as they seemed to in the past. I guess I can relate to that dark ring around the sun. More than ever, I recognize how much I see "through a glass darkly". At least I can still see the light from the darkness.
Posted by Clean Cut at Wednesday, May 04, 2011 5 comments:

ALL Families Are Valuable

"What I think I wish, and this is just an idea taking form, is that the 'value of the traditional family' was replaced with 'the value of all families'. I feel like a footnote when I get told, after a talk about family roles, that 'Oh, but you’re okay too!' ALL families are valuable. We are all likely working towards the same goals- namely an environment where those we care for, including ourselves, can grow and learn in love, happiness and safety."