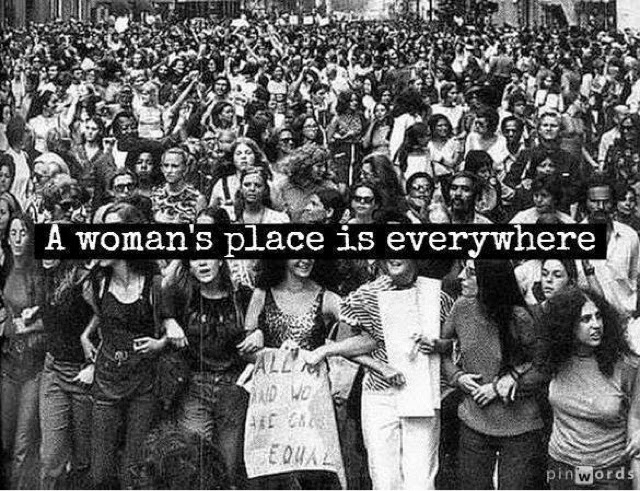 I agree that women should be in decision-making roles, and that it is often not the case that they are.

I will say, however, that I believe the approach to effecting this is different than what is commonly used in political and civil realms. Just as the priesthood must be wielded in righteousness, it is unrighteous use of power to try to force the issue of change on those who are not ready. It is frustrating and difficult, but if we want the backing of heaven in changing women's level of participation in the Church, we must do it righteously and patiently.

At any rate, I don't want to pontificate here, but I feel strongly about that, which is why I do not align myself with most LDS feminist movements.

Hi Clean Cut,
thanks for your article.
The church is slowly catching up with society (and dare I say it God's will) in regards to women's roles in both the family and church administration.
It has just begun to really get up my nose that women have to wait until 21 years old to serve a mission, and are only allowed to serve 18 months rather than two years. I was not worried when I served my own mission, but feel disgruntled for my daughter who will have to wait two years longer than her brothers.
Do you or anyone else have any ideas of doctrine behind this practice? Perhaps someone will tell me about the value of marriage, rearing a family while young etc. But surely not before 21! (please)
thanks,
Jenny

I support the principle of a universal male priesthood as practiced in the Church of Jesus Christ of Latter-day Saints. There is a great beauty in it. I believe it is this way for a reason in the Lord, although I do not presume to declare the exact reason. The Lord's ways are not our ways, and the Lord's understanding are not our understandings.

It might be true that somewhere along the way, a man has abused his authority, but a woman can do the same thing -- so abuse of authority is not a male matter.

There is no unfairness in the Church of Jesus Christ of Latter-day Saints. Only men are called to the priesthood, this is true, but we believe that a person must be called of God, by prophecy, and by the laying on of hands by those who are in authority, to preach the Gospel and administer in the ordinances thereof.

I fully support the presence and participation of women in ward councils.

I apologize for being slow to respond. Bad timing to post and then disappear in order to complete a final exam!

SilverRain, I agree that there are some feminist tactics that would prove to be unproductive in this area--especially in getting more women into decision-making roles. I think we find a key in the verses which immediately follow those you linked to:

"No power or influence can or ought to be maintained by virtue of the priesthood, only by persuasion, by long-suffering, by gentleness and meekness, and by love unfeigned; By kindness, and pure knowledge, which shall greatly enlarge the soul without hypocrisy, and without guile"

Gentle "persuasion" stands out to me here as a better approach.

Cythina L., I thought about that word choice as well. Good question.

Jenny, obviously the Church isn't perfect, and it can't be, because it's run by and made up of imperfect human beings. The gospel of Jesus Christ may be perfect, but the Church is a living and therefore evolving instrument, and I'm grateful for its continual improvement. Heaven knows there's been many of changes in the past and will certainly be many more in the future. (Which reminds me of a post recently shared by a friend who linked to it and mentioned how he prefers the "updated" Church.)

Unfortunately, beyond a few personal speculations, I don't have much insight into the decision to keep women from serving missions until age 21.

ji, I sure hope my post doesn't imply that anyone who prefers an all male priesthood is a misogynist. To my knowledge I haven't made any statement about whether I think women should or shouldn't hold priesthood--just that I don't see any good reason why they can't.

Unlike you, however, I'm not sure I see the "beauty" of an all male priesthood. Perhaps you can expound on that? I also don't presume to know if the current "set up" is the will of the Lord. I think many people assume it is, but I've simply decided to reserve judgement.

I do think it would be nice to look up on the stand (whether in a ward or in General Conference) and see greater numbers of competent and capable women up on the stand--leading in the Church. I'm willing to be proven wrong, but I just don't believe that there's any good reason why women can't or shouldn’t hold any kind of "priesthood", or at least serve perhaps in traditionally male Church leadership positions, since some of those kind of changes could potentially be made even without ordination to the priesthood. But why must we speak of priestesses only in the future tense? Why must they only administer now in the temple?

LDS women of yesteryear didn't need priesthood in order to anoint with oil and administer to their sick children, nor to give blessings of healing. Their participation in the laying on of hands showed their faith in Jesus Christ and His power to heal. Jonathan Stapley has a forthcoming paper on women and ritual healing in the Journal of Mormon History, but he also talks about that in this post: "A Mormon feminist manifesto" and also in this podcast.

Even Joseph Smith said that "if the sisters should have faith to heal the sick, let all hold their tongues...Respecting the females laying on hands, he further remark’d, there could be no devil in it if God gave his sanction by healing-that there could be no more sin in any female laying hands on the sick than in wetting the face with water. It is no sin for any body to do it that has faith, or if the sick has faith to be heal’d by the administration.” (Ehat, Andrew F. and Lyndon W. Cook. (eds). The Words of Joseph Smith: The Contemporary Accounts of the Nauvoo Discourses of the Prophet Joseph. Provo, Utah: Religious Studies Center, BYU, 1980, 115-116)

Brigham Young said: “Study and learn something for yourselves. It is the privilege of a mother to have faith and to administer to her child; this she can do herself, as well as sending for the Elders to have the benefit of their faith.” (Brigham Young, November 14, 1869, Journal of Discourses, 13:155.)

There's also an interesting quote by Erza T. Benson, an apostle who said: "The priests in Christendom warn their flocks not to believe in 'Mormonism'; and yet you sisters have power to heal the sick, by the laying on of hands, which they cannot do." 1852, Elder Ezra T. Benson cited in Rodney Turner, Woman and the Priesthood, p.282)

I think (and feel in my heart) that returning to THAT would be a beautiful thing.

"Why aren't the women included?"
http://rationalfaiths.com/why-arent-the-women-included/