Does "we cannot lead you astray" lead to blind self-security? 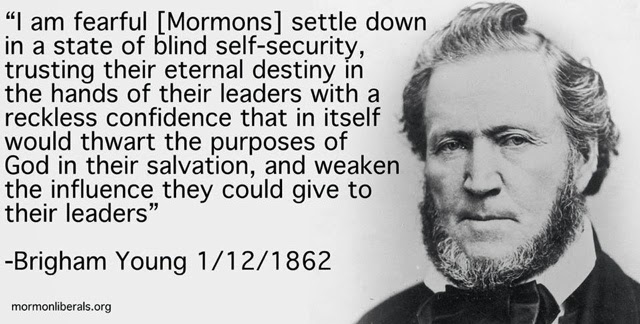 I found this post to have some interesting things to say about that quote:

Jeff, the quote is accurate as quoted. It's not a paraphrase.

Moreover, what makes the few "we cannot lead you astray" claim so interesting is that there is a long and rich tradition in LDS Church literature of Church leaders acknowledging their own fallibility (“fallibility” in this sense means susceptible to sins, offenses, errors, mistakes, foibles, bad judgment, and other symptoms of the Fall).

“This morning, I read German, and visited with a brother and sister from Michigan, who thought that ‘a prophet is always a prophet;’ but I told them that a prophet was a prophet only when he was acting as such.” -- Joseph Smith, Founder and President of the LDS Church 1830-1844, quote from History of the Church 5:265

“Now those men, or those women, who know no more about the power of God, and the influences of the Holy Spirit, than to be led entirely by another person, suspending their own understanding, and pinning their faith upon another's sleeve, will never be capable of entering into the celestial glory, to be crowned as they anticipate; they will never be capable of becoming Gods. They cannot rule themselves, to say nothing of ruling others, but they must be dictated to in every trifle, like a child. They cannot control themselves in the least, but James, Peter, or somebody else must control them, They never can become Gods, nor be crowned as rulers with glory, immortality, and eternal lives. They never can hold sceptres of glory, majesty, and power in the celestial kingdom. Who will? Those who are valiant and inspired with the true independence of heaven, who will go forth boldly in the service of their God, leaving others to do as they please, determined to do right, though all mankind besides should take the opposite course.” -- Brigham Young, LDS Apostle 1835-1877, President of the LDS Church 1847-1877, quote from Journal of Discourses 1:309-316

“Some may say, ‘Brethren, you who lead the Church, we have all confidence in you, we are not in the least afraid but what everything will go right under your superintendence; all the business matters will be transacted right; and if brother Brigham is satisfied with it, I am.’ I do not wish any Latter-day Saint in this world, nor in heaven, to be satisfied with anything I do, unless the Spirit of the Lord Jesus Christ, the spirit of revelation, makes them satisfied. I wish them to know for themselves and understand for themselves, for this would strengthen the faith that is within them. Suppose that the people were heedless, that they manifested no concern with regard to the things of the kingdom of God, but threw the whole burden upon the leaders of the people, saying, ‘If the brethren who take charge of matters are satisfied, we are,’ this is not pleasing in the sight of the Lord.” -- Brigham Young, LDS Apostle 1835-1877, President of the LDS Church 1847-1877, quote from Journal of Discourses 3:43-51

“What a pity it would be if we were led by one man to utter destruction! Are you afraid of this? I am more afraid that this people have so much confidence in their leaders that they will not inquire for themselves of God whether they are led by Him. I am fearful they settle down in a state of blind self-security, trusting their eternal destiny in the hands of their leaders with a reckless confidence that in itself would thwart the purposes of God in their salvation, and weaken that influence they could give to their leaders, did they know for themselves, by the revelations of Jesus, that they are led in the right way. Let every man and woman know, by the whispering of the Spirit of God to themselves, whether their leaders are walking in the path the Lord dictates, or not. This has been my exhortation continually.” -- Brigham Young, LDS Apostle 1835-1877, President of the LDS Church 1847-1877, quote from Journal of Discourses 9:147-150

“President Joseph Fielding Smith has said: 'It makes no difference what is written or what anyone has said, if what has been said is in conflict with what the Lord has revealed, we can set it aside. My words [i.e. the teachings of the Prophet, the President of the Church], and the teachings of any other member of the Church, high or low, if they do not square with the revelations, we need not accept them. Let us have this matter clear. We have accepted the four standard works as the measuring yardsticks or balances by which we measure every man's doctrine. You cannot accept the books written by the authorities of the Church as standards of doctrine, only insofar as they accord with the revealed word in the Standard Works. Every man who writes is responsible, not the Church, for what he writes. If Joseph Fielding Smith writes something that is out of harmony with the revelations, then every member of the Church is duty bound to reject it. If he writes that which is in harmony with the word of the Lord, then it should be accepted.’” -- Joseph Fielding Smith, LDS Apostle 1910-1972, President of LDS Church 1970-1972, quote from Bruce R. McConkie’s Mormon Doctrine, p. 547, also in “Are the General Authorities Human” 1966

“Though General Authorities are authorities in the sense of having power to administer church affairs, they may or may not be authorities in the sense of doctrinal knowledge, the intricacies of church procedures or the receipt of the promptings of the Spirit. A call to an administrative position of itself adds little knowledge or power of discernment to an individual." -- Bruce R. McConkie, LDS Apostle 1972-1985, quote from Mormon Doctrine, p. 284, pre-1966 edition.

“Prophets are yet mortal men with imperfections common to mankind in general. They have their opinions and prejudices and are left to work out their problems without inspiration in many instances.” -- Bruce R. McConkie, LDS Apostle 1972-1985, quote from Mormon Doctrine, p. 547, pre-1966 edition.

“With respect to people feeling that whatever the brethren say is gospel, this tends to undermine the proposition of freedom of speech and thought. As members of the church we are bound to sustain and support the brethren in the positions they occupy so long as their conduct entitles them to that. But we also have only to defend those doctrines of the church contained in the four standard works--the Bible, the Book of Mormon, the Doctrine and Covenants, and the Pearl of Great Price. Anything beyond that by anyone is his or her own opinion and not scripture. Although there are certain statements that whatever the brethren say becomes the word of God, this is a dangerous practice to apply to all leaders and all cases. The only way I know of by which the teachings of any person or group may become binding upon the church is if the teachings have been reviewed by all the brethren, submitted to the highest councils of the church, and then approved by the whole body of the church.” -- Hugh B. Brown, LDS Apostle 1958-1975, Member of First Presidency of LDS Church 1961-1970, quote from ca. early 1970s, from Chapter 8, An Abundant Life: The Memoirs of Hugh B. Brown

“A serious problem that has confronted us especially during the past few decades has been our denying the priesthood to the Negro. Personally, I doubt if we can maintain or sustain ourselves in the position we seem to have adopted but which has no justification in the scriptures, as far as I know. The president says it can only come by revelation. If that is true, then a change will come in due course. . . . It is, in other words, a policy, not necessarily a doctrine.” -- Hugh B. Brown, LDS Apostle 1958-1975, Member of First Presidency of LDS Church 1961-1970, quote from ca. early 1970s, from Chapter 8, An Abundant Life: The Memoirs of Hugh B. Brown

“If we lose our emotional and spiritual independence, our self-reliance, we can be weakened quite as much, perhaps even more, than when we become dependent materially. If we are not careful, we can lose the power of individual revelation. . . . Spiritual independence and self-reliance is a sustaining power in the Church. If we rob the members of that, how can they get revelation for themselves? How will they know there is a prophet of God? How can they get answers to prayers? How can they know for sure for themselves?” -- Boyd K. Packer, LDS Apostle 1970-present, (Acting or Actual) President of the Quorum of the Twelve Apostles for the LDS Church 1994-present, quote from General Conference, April 1978